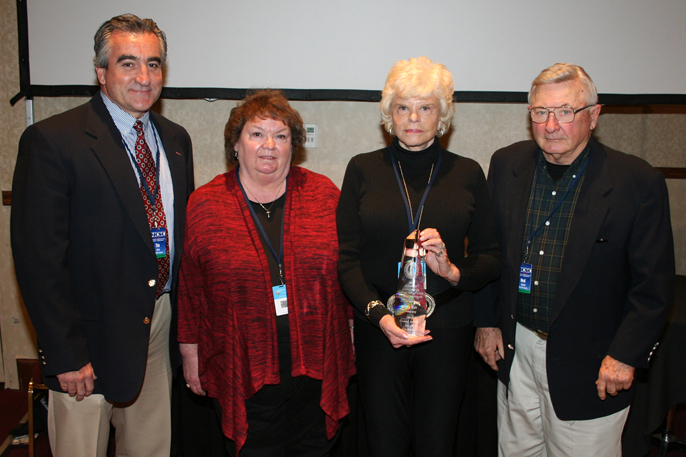 The 2013 Builders’ Association Safety Excellence Program has announced Kelly-Hill Company as the First Place Award Winner in the Subcontractor Division for 50,001–150,000 work hours, as well as the Grand Award Winner for all Divisions for best overall safety program. These awards represent The Builders’ Association, Missouri Department of Labor Standards, Kansas Department of Labor, and the Occupational Safety and Health Administration Kansas City Office. The awards were presented at the Seventh Annual Builders’ Association Safety Excellence Awards Program Breakfast on Thursday, March 13, 2014 at the Adams Pointe Conference Center in Blue Springs, Missouri.

Kelly-Hill Company received this prestigious honor due to their “Common Sense” Approach to Safety. They have gone more than five years and three months without a reportable incident. The “Common Sense” Approach is applied by having dedicated training sessions, daily safety meetings, tool box talks, and simply the pride all of the employees take in being safe. With an average of more than 135,000 production hours a year, Kelly-Hill Company is a leader in safety programs.

The National Railroad Construction and Maintenance Association (NRC) has announced Kelly-Hill Company as a Category II Gold NRC 2013 Safety Award Winner. This award represents the extensive efforts made to promote and improve safety in the rail industry. Scoring was objective and required judges to review Kelly-Hill Company’s full safety program and practices with a full extensive outside review. The award will be accepted next week (January 5-8, 2014) at the NRC Conference held at the JW Marriott Desert Springs in Palm Desert, CA. 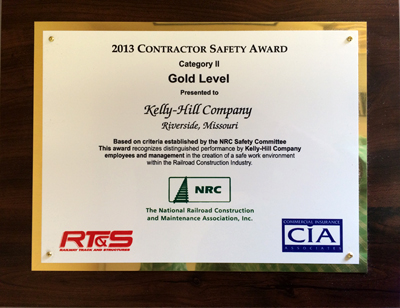 The criteria for the NRC 2013 Safety Award was divided into four categories, based on the average number of employees. Each category was scored on workers’ compensation experience, OSHA work-related injuries and illnesses, OSHA statistics violations, roadway worker protection training, and safety program elements. Point totals of each category determined a Winner (highest point total), Gold (80% or more points), Silver (70%-79% points), or Bronze (60%-69%).

Kelly-Hill Company takes prides in their safety program and the practices that follow. To receive the Gold Award in Category II indicates that Kelly-Hill Company is following national standards to continuously keep their personnel safe while constructing railroad infrastructure.

Kelly-Hill Company, a private railroad contractor, is pleased to announce the addition of Tim Rock as the new Chief Operating Officer. Rock brings 30 years of experience from the railroad industry. In his new role, he will focus on operations, management and expansion for the entire company.

“I’ve had the pleasure of knowing and working with Tim through various projects over many years,” said Kelly-Hill Company owner, Neal Houser. “I’ve been impressed by his knowledge of the rail industry, how he interacts with clients and his passion to get things done right.”

Prior to joining Kelly-Hill Company, Rock most recently served as the Regional Vice President during his 16-year total tenure at TranSystems, a transportation engineering firm based in Kansas City, MO. His project background in the rail industry includes bridges, tunnels, track, yards, maintenance and intermodal facilities, and drainage. Rock’s expertise in overall freight movement operations, specifically with railroads, has added to his intimate knowledge and relationship with Class I, II, and III railroads.

Rock holds a Bachelor’s of Science degree in Biology from Washington and Lee University and a Master’s of Science in Construction Management from Texas A&M. 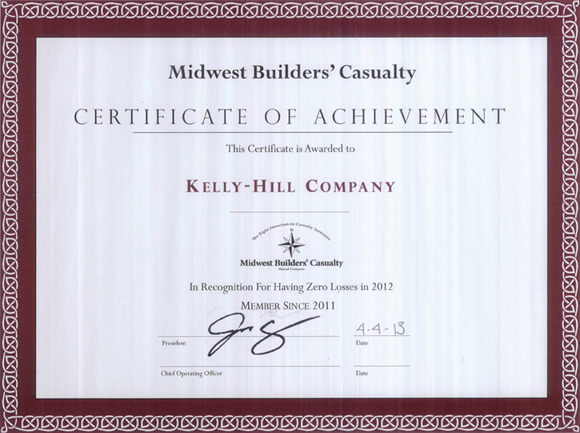 Kelly-Hill Company was awarded a Certificate of Achievement in recognition for having zero losses in 2012. Kelly-Hill Company trains staff about the appropriate safety precautions to take and keeps safety at the forefront of employees’ minds to achieve this recognition. 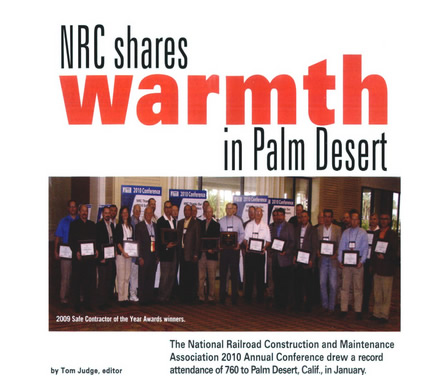 NRC awarded Kelly-Hill Company with a Safe Contractor of the Year award in January 2010 at the National Conference in Palm Desert, California. As Kelly-Hill Company works daily with employees to keep safety at the forefront of everyone’s minds, it is a great honor to be recognized in the industry for their commitment and hard work.

Tied up: Kelly-Hill Steams Ahead With Railroad Building, Maintenance (October 2007)

From the Kansas City Business Journal, James Dornbrook
The boom in ethanol and biodiesel plant construction is helping Kansas City-based Kelly-Hill Co. make tracks -- literally. "We've got about a $9 million backlog of projects right now," Kelly-Hill majority owner Alice Houser said. "Ethanol plant construction is getting bigger and bigger, and I think it will continue to grow and be good for us." The number of plants has jumped from 50 in 1999 to 119 today, with 86 under construction or expanding, according to the Renewable Fuels Association.

Kelly-Hill's workload reflects that growth: About 50 percent of its work comes from ethanol plant construction. The company builds the railroad spur lines that connect new plants to railroad rights of way and performs maintenance on existing lines. The spurs give ethanol plants access to trains that efficiently haul fuel to markets and provide the vast amounts of grain or corn necessary for ethanol production.
The new jobs helped the company record $7.3 million in revenue in 2006, up 33 percent from $4.9 million in 2005. The company expects to reach about $10 million in 2007.

Alice Houser bought Kelly-Hill Co. in 1987. Her partners are her husband, Neal, who handles on-site project work; her son, Greg Wright, who manages project bidding; and her daughter-in-law, Kathy Wright, the office manager. "When I bought the company, we had about 15 employees and very little machinery," Alice Houser said. "There was one decent truck, and our average revenue was about $500,000."

Paul Waddell of Kansas City Power & Light Co. said Kelly-Hill started landing the utility's rail maintenance contracts soon after Houser bought the company. He said Kelly-Hill has blossomed since its meager beginnings. "They weren't railroaders when they first started but educated themselves and made smart investments in equipment," Waddell said. "They had some really old equipment when they first started working with us. They've invested in a far better state of equipment since then. They took the time to better educate themselves about railroad track materials and equipment, and it worked great for them."
Houser said her husband, a pilot and former machinist, is blessed with an aptitude for fixing just about anything. She said he quickly learned a lot about the business from a foreman and supervisor who were with Kelly-Hill when Houser bought it.

Dale Rapp, a retired loan officer who worked for several local banks and always handled Kelly-Hill's borrowing, said Neal Houser's keen knowledge of machinery was a key to growth. "Some equipment he wanted to buy just looked awful to me, but he would know how to fix it," Rapp said. "He used to buy old rail maintenance equipment on auction and rehab it. In some cases, he would use it for a while and then sell it for more than he paid."

Kelly-Hill never bought any unnecessary equipment, Rapp said, and the company sold those things it didn't need anymore. That made providing equipment loans an easy process. Rapp said the company has the added benefit of a reputation for integrity. "I've seen Neal finish jobs where he's lost money, where others might have just walked off and said forget it," Rapp said. "He just grits his teeth and completes what he said he'd do. By taking their lumps, it solidified their reputation of tremendous integrity. People remember that, and it helps them land work."

In time, Rapp said, the family learned to not underbid just to land a contract. He said lots of companies don't learn that lesson -- and don't last very long. Charles Kelly and Niles Hill founded Kelly-Hill Co. in 1955, after working as engineers for Burlington-Northern Railroad. Alice Houser started working for them in 1962, running the Kansas City office. She was the only employee at the time, handling payroll and contract paperwork. Although Hill was her boss, Houser said he didn't really pay a lot of attention to the office. She said Hill had no interest in drumming up new business. "He would go on vacations, sometimes for a month at a time, and I ended up doing more and more," Houser said.

The office was about to be closed when Houser bought it in 1987. "I wanted to stick with it and see if we could grow it," she said. "I could see there was potential that hadn't been tapped." One of the first moves was to invest in machinery because much of the work in the early years was being done by hand. The company bought tampers that set the gravel, automatic tile layers and spiking machines. Now, the workers have laser-guided, computer-controlled machines that are more accurate and efficient than previous models. "Buying machines made everything more efficient," Houser said. "One guy could run a machine that did the work of six men. That led to the ability to do more jobs and bring in more money."
The business had an office at 34th Street and Broadway, far away from its equipment yard, so Houser combined both operations into one facility. It immediately helped with communication. Kelly-Hill eventually added a machine shop to repair equipment that frequently broke down.

The newly owned business landed its first big contract in 1989, a $125,000 job for the Iowa Beef Packers.
Although the Beef Packers contract was a big deal for the business at the time, Houser said the biggest break came from tragedy. The flood of 1993 washed out miles of track, all of which needed to be replaced. Kelly-Hill landed a lot of the work, helping it grow and buy new equipment.
Replacing the flooded track soon led to a $1 million maintenance contract for Rail America's Missouri-Kansas line and then a large, five-year contract with the U.S. Navy for a naval weapons rail line in Indiana. In 1999, Kelly-Hill landed a five-year contract providing maintenance for 65 miles of track owned by the Omaha Power District. When that contract ended, ethanol and biodiesel plant construction contracts started rolling in. Houser said Kelly-Hill had one salesman who died about four years ago but had helped establish many contacts. A majority of business now comes from word of mouth.

From here, Houser said she hopes to get more main-line railroad work to position the company for the future. "There is always going to be a need for rail," Houser said. "Every company that uses coal has it come in by train. That's not going to stop. We want to be there for them when their rails need work."
Railroad Services
New Railroad Track Construction
•
Railroad Track Maintenance
•
Bridges
•
Switching Operations
•
Specialized Services
•
Emergency Services